Bringing in Ties on the Wind River

This article was provided by the Fremont County Museum System and originally published on PitchEngine.

On the demand for railroad ties from the Chicago & Northwestern Railroad the Tie Drive started in 1914 and lasted until 1987 with the end of timbering. In the beginning of the Tie Drive the Wind River was used as a means of transporting the ties from above Dubois down to Riverton where the ties were hauled from the river to the tie yard. These ties, during the time of the river transport, saw over 70 miles of rough terrain and water. The ties came down hand-built flumes through the Warm Springs canyon, down into the rough waters of the Wind River, flowing over boulders, jamming up and being released, then spilling over and through Diversion Dam and ending up along the banks of the Wind River near Riverton.

For the men in Dubois, their job was to cut and hew the timber to shape and wrestle these logs down to the flume. For the Riverton men, it was up to them to haul the water logged ties onto land and stack them into the tie yard. The use of the river to transport the ties ended in 1947 after trucks were brought in. This modern convenience allowed the tie company to haul the ties continuously rather than once a year. With continuously bringing in ties, the workers were paid monthly rather than yearly.

This photograph shows ties that have been caught and guided into a pool, off of the Wind River. The ties are then guided to the conveyor located in the background. Men with pike poles are seen standing on ties, guide the ties and preventing dams. This photograph was taken well before 1947, prior to when river operations were closed in favor of trucks for transportation.

Re-discover the Winds by visiting the Dubois Museum, the Pioneer Museum in Lander or the Riverton Museum. Visit www.fremontcountymuseums.com for a complete schedule of events, latest newsletter and the latest Wind River Mountaineer. 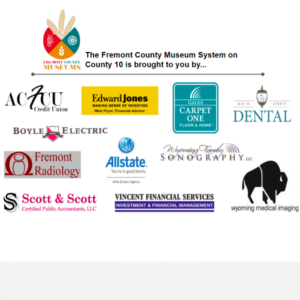