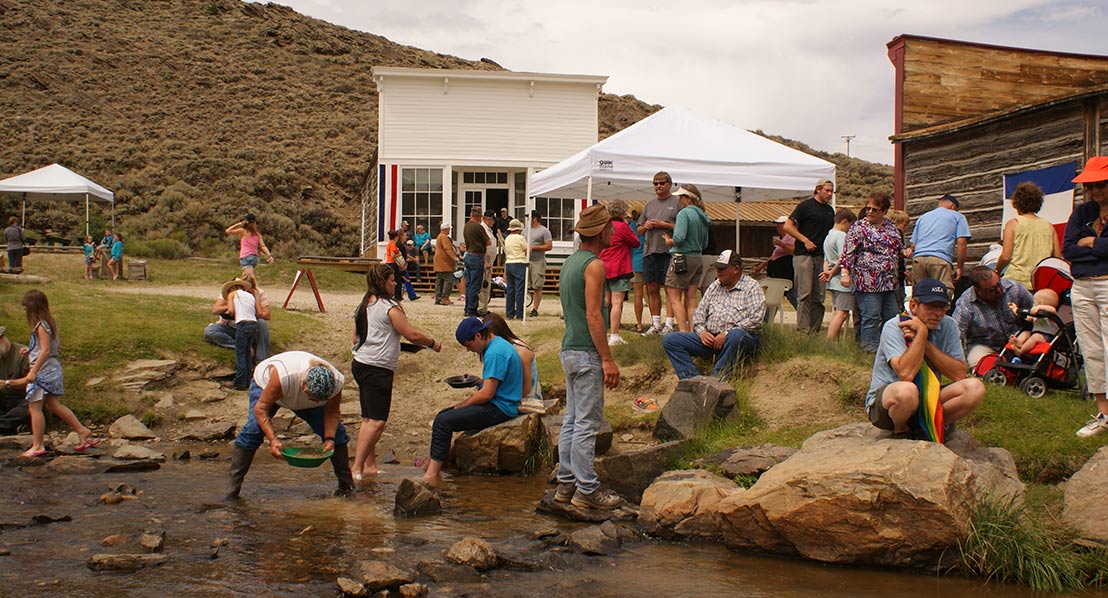 They called it “Sweetwater Fever,” when the lure of gold made you sell everything you owned and you headed west to strike it rich.  By the summer of 1868, an estimated 2,000 people were living in the area in towns such as Miner’s Delight, Atlantic City, and South Pass City to find their fortune.  Today, you can visit these historic sites and try your hand at gold panning at South Pass City State Historic Site.

One of the favorite (and loudest) events is anvil blasting or anvil shooting, as some call it. It was a way miners celebrated big events.  Two anvils are set one on top of the other, the cavity in the bottom of the anvil is filled with blasting powder and detonated. Miners used blasting powder every day to break up the rock in the mines, but on special days they would use the same blasting powder to launch anvils into the sky.  Historically they would have had competitions to see who could get the most height and boom as well.

Fremont County still attracts gold prospectors to this day.  Start out by visiting the BLM office in Lander (1335 Main St. 307-332-8400) to find out where you can go.  Some areas are off limits to gold panning and there are some places you can go without any permits.  Follow these three criteria and know before you go:

The water swirls in the pan and I lean in closer to see if I can see a sparkle that might be gold.

For some people, Jon Lane, the curator at South Pass City Historic Site says, panning for gold is about mastering a skill. For others it’s a chance to re-enact something historical.  And some people truly get bitten by the gold bug.

It was the historical aspect that drew me to try panning for gold—or so I thought.

As I filled my pan with water, I couldn’t help notice how much I wanted to find at least a fleck of gold in the murk.

South Pass City State Historical Site lets you find out what kind of gold panner you are. You can buy bags for $5 at the general store with a guaranteed few flakes, or some days, depending on supply, you can use dirt donated from active claims in the Oregon Buttes area. There are always pans available and staff can help you master the technique of swishing the dirt in water. Gold is 19 times heavier than water and sinks, while sand and gravel is only about three times heavier than water and can be swished around in the pan and over the sides, Lane said.

“I do think there is something innate about it,” Lane tells me of people’s love of gold.

Looking around South Pass City, which grew up because of gold, and thinking of the people drawn to the  ghost town now that still want to try to find at least a flake, I understand his point.

Panning for gold involves scooping water into the pan of dirt, swirling and swishing and repeating. It’s just one way visiting South Pass City transports you back in time.

South Pass City was once a booming community in what was the Wyoming territory. Its population reached almost 3,000 people at one point.

The way the city has been maintained gives the illusion the people just up and left one day.

Of course that isn’t how it happened, but the state has worked hard to maintain the original buildings—a few are considered among the oldest buildings in the state—and leave the original furnishings in the homes and shops.

Merchandise, like bolts of cloth and rolls of ribbon, still sit on the shelves in the general store, waiting for the next owner to inherit the existing inventory.

Families have donated items, like books used in school, back to the area. It provides a unique experience wandering the buildings and peeking into the windows of homes with bedding that a family once slept under in the city, or a stove where a miner once warmed himself by.

During gold rush days the printers and blacksmith’s breathe new life into the town with live demonstrations of trades that kept the town growing.

I really get an almost voyeuristic sense of life in South Pass City after walking among the buildings.

Which makes the contrast at nearby Miner’s Delight all the more obvious. Here is a place your imagination can take over as you walk among the dilapidated buildings. It’s the type of ghost town I wouldn’t want to visit alone at night for fear I might hear the voices of long-gone miners or Calamity Jane who for a while called the town home.

Miner’s Delight began as Hamilton City, but earned a name change after a particularly fruitful year of mining.

The town popped up around 1867 when those seeking gold wandered into the area and found the first flakes. An 1870 census listed the population at 75 people including 16 children.

Miner’s Delight is rich in history and legend. A Chicago newspaper reporter visited the town and reported on a pet grizzly cub someone tamed and named Cuff. He was the community pet until he started growing and then raiding houses. That was the end of Cuff.

The town had its last boom during the Great Depression, Craig Bromley an archaeologist with the Bureau of Land Management old me. People moved into the abandoned cabins figuring they might as well look for gold since they couldn’t find a job. They stayed a few years and left, the last of those that would call Miner’s Delight home.

Walking among the 11 dilapidated buildings of Miner’s Delight and looking at the empty shells of the structures, it’s easy to let my imagination run wild and picture the days when these homes housed miners and families and dreams. It’s a little sad to see it all abandoned. The range of the buildings, some are from the 1880s, some from the 1900s and others from the 1930s, give a sense of different eras of history and the interpretive signage tells a story that becomes vivid as you read and see the place for yourself.

If you head to Atlantic City you can see what South Pass City and Miner’s Delight almost became.

What I like about Atlantic City is it’s a hearty town that as the communities around it faded away, it managed to forge ahead and is now one of Wyoming’s oldest towns.

In the winter only a few of the most intrepid residents stay, but in the summer enough return to give the town a bustling feel and to offer a few services like food and lodging and some summer events.

It’s a  great place to see the juxtaposition of old meets new and think for a moment about how South Pass City or Miner’s Delight might look today if they too had survived.

A great thing about all three of these towns is that they are situated near each other and can be seen in the same day.

That means, if you didn’t strike it rich earlier in the day, you can always return to South Pass City and see if your panning skills have improved in your hours away. I still haven’t found my fortune, so I might just see you there.