I was already a winter enthusiast. Wind River Country is a year-round playground. The winters are long, but are made less long by all the fun one can have. Depending on weather, conditions and my mood, I cross country ski, snowboard, snowshoe or go sledding.

But Winter just got even more fun for me. How? Enter fat biking.

During the 1990s I was a mountain biking enthusiast. This was before the arrival of the local Lander Cycling Club, which has developed so many phenomenal mountain biking trails. By all indications, the time to be a mountain biker in Wind River Country is now.

But back to winter. Fat bikes are mountain bikes that have big, fat tires with beefy traction. One of my closest friends is a fat-biking enthusiast, and I had heard great things from her about her fat-biking in winter. In addition, I see more and more people riding the fat tired-bikes around town, and hauling them to and from local trailheads. They are always smiling.

I was curious, and was chomping at the bit to see what all of these fat-bikers were smiling about. So I asked Kathy if she’d take me on an Epic fat-biking adventure. Of course she said Yes, and almost immediately we hatched a plan, and a date, and she emailed me a gear list.

I rented a fat-bike from The Bike Mill, owned by Rio Rose, an enthusiast who has done a lot to increase the sport in our area. 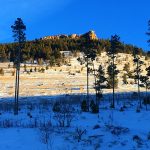 After loading our bikes down as if they were mules, we saddled up and started up the first switchback. I put my bike in the lowest gear and settled in for what would be a long but scenic “sit and spin” session.

I loved it immediately! We were mostly alone on the Switchbacks. Except for two snowmobilers who zoomed past us early on, we had the trail to ourselves. It was glorious. First light shined on Windy Point, the rocky outcrop that overshadows the second switchback.

After a couple of switchbacks, the sun was shining more brightly and the temperatures were warming. Trail conditions grew a little softer. Our bike tires dug in deeper which caused riding to be more challenging. It was similar to riding a mountain bike in deep sand. It was hard to ride in a straight line, let alone stay on the bike and keep it going forward. It was here that Kathy taught me that deflating our tires a little would help us. We let a little air out of our tires, and just like that, we were able to stay on our bikes (ride) again.

Near the top of the Switchbacks, we enjoyed our first views of the magnificent Wind River Peak, which is 13,192’ tall, and is the tallest mountain in the southern Wind River Range. We stopped briefly at the base of Fossil Hill, to use the restroom facilities, before continuing. 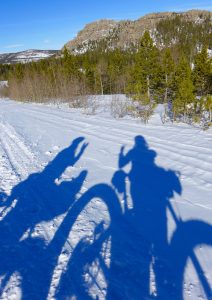 Everything’s a little bit harder in winter, and like most adventures, things didn’t go exactly as planned for our adventure. The going was slower than anticipated. The Switchbacks, which are groomed by Wyoming State Trails, were in pretty good condition, but we had a significant headwind on every other switchback. Kathy and I each were blown off our bikes, and off the trail, a handful of times. And there were some icy sections we opted to hike our bikes around.

Frye Lake was frozen and stunning with snow-covered peaks behind it. After taking a couple of photos while bracing to keep standing despite gale force winds, we checked the time and acknowledged Blue Ridge Lookout would be a No Go. We had the energy, and possibly enough daylight to go for it, but Kathy and I agreed that having a fire and enjoying our experience was more important than grunting it out to reach a particular milestone.

We found some dead trees and made a little fire. We put on all of our layers, ate a good lunch, and downed a bunch of water before treating ourselves to a little “adult beverage.” The sun shined brightly on us, casting long shadows of the pine trees. I remember taking in the view while sitting with my good friend by our blazing fire and thinking, “It doesn’t get much better than this.” I find that I think, and say, this often in Wind River Country…

After a bit, we put our fire out, and headed back to the trail, and put on our goggles for our return ride, which would be mostly downhill. Kathy gave me some pointers about riding downhill. I had imagined it would be like a summer time road biking descent of the Switchbacks, which can be white knuckle, screaming fast – and possible dangerous. She assured me it wouldn’t be like that because of the softening snow. Thankfully, she was right.

On the descent, the sun was lowering. It was about an hour before the sun would go behind the mountains, and one of my favorite times of day. I told Kathy to go ahead at whatever speed she’d like, and i promised I’d be somewhere behind her, and told her not to worry.

We each got into our individual Zen states. I kept Kathy in my sights, but otherwise was left alone. I could feel everything with my flattened tires. I felt my tires grabbing onto the surface and I pedaled every now and again. I was moving slow enough that I didn’t have to pay too much attention to the biking, and could let my thoughts and eyes wander to my surroundings.

The scenery was beautiful, as the sun highlighted to my left – Fairfield Hill and the south-facing slopes that stretched from the Lander Valley below up into the Canyon and beyond. Fossil Hill to my right was half dark in shadow, and half highlighted by what would be the last light of the day.

We finished before sunset. It was an Epic day, and one that I won’t forget. And now I’m hooked on yet another way to experience Wind River Country, this place that I love so much.