From France, with Love

It’s not uncommon to come across people—particularly artists and the sort who appreciate the finer things in life—who commit to spend a portion of each year somewhere in France. But it turns out it isn’t so difficult to find a discerning Frenchman who spends a portion of each year here in Wyoming’s Wind River Country.

Claude Poulet discovered Wind River Country in 1982 while on assignment for a French magazine, not surprisingly, to do create a story about cowboys. Perhaps the same thing that feeds the soul of a cowboy is what sparked a love in Poulet.

“What I love a lot here is the wilderness. You can ride your horse one week and not cross anybody,” he described.

Over the years, his work has expanded from that first magazine piece about cowboys to more ranch and cowboy photography assignments for the most prestigious magazines in the world, three books about cowboy life in both the U.S. and France, and many awards and accolades.

But he always returns to Wyoming’s Wind River Country, year after year, a land he loves for its fascinating stories through history and seasons, across cultures and terrain. Most recently, he has published two photography books dedicated to Wyoming and Wind River Country landscapes.

In 2012, he teamed up with fellow Wind River Country transplant and writer Bayard Fox to publish “Wyoming from the air: Where the eagle soars.” 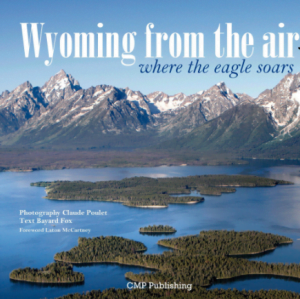 “I like the big, wide landscape, like the South Pass area. I also like to compose my pictures with lots of sky to show the immensity of these landscapes,” Poulet explained. In this case, he launched into that enourmous sky to capture big, wonderful Wyoming from above.

“Wyoming is that vast tract of high plains, badlands, plateaus, alpine meadows, meandering rivers and towering mountains that tens of thousands of Americans fly over annually on their way to the Left or Right coasts,” Laton McCartney writes in the book’s foreword. “Recently [Poulet] began photographing Wyoming landmarks from the air all across Wyoming. The result, the first full blown portrait of the state from an eagle’s eye view or in this instance, an eagle eyed photographer.”

Broken into regional sections, the book gives a rarely-observed perspective on the incredible and varied treasures of Wyoming, including those of Wind River Country. Taken from a small plane that flies at slower speeds, hired locally in Dubois, aerial photography demands a familiarity with one’s camera equipment, lighting and balance.

“The most important in these kinds of pictures is the light,” Poulet pointed out, immediately adding. “You must compose your picture fast because planes don’t stop.”

The following year, Poulet released a book focused entirely on the Wyoming landscapes he loves most: “Wind River Country: Hidden heart of Wyoming.”

The back flap of the book describes Poulet’s calling: “As he researched the area, he became aware of the fact that, despite countless books about Wyoming and places like Jackson Hole, very little had been written about Wind River Country, the hidden heart of Wyoming, which remains comparatively unknown to the public. He strongly felt that this situation should be corrected, given the area’s tremendous attractions and authentic charm.”

So the stunning, 175-page, coffee-table book, with text once again crafted by Fox, was published in 2013. Its pages are decorated with splendid portraits of Native Americans who call Wind River Country home, giant moose making their way through misty grasses, snowmobile riders and cowboys roaming the land, and graceful portraits of the landscape herself.

“I don’t know, maybe the Jackson Hole area, Teton and Yellowstone [National Parks] are more famous, but for me there are so many things to shoot in Wind River Country, from the Red Desert to Absaroka, Wind River Range and more,” Poulet explains.

And that is what he does. He shoots and shoots and publishes and relishes. For the past 10 years, he has been consistently alternating his time between France and Wind River Country by spending four summer months and one winter month “in the country” and the remaining months in France.