The Man Behind the ‘Herb Roach’

Herb Augustine stares down at the roach—a piece of regalia dancers wear on their heads for powwows—in his hand. He bounces it just a bit with his wrist and watches the nearly 10-inch porcupine hair wave with life, rippling from the crown down to the tail. 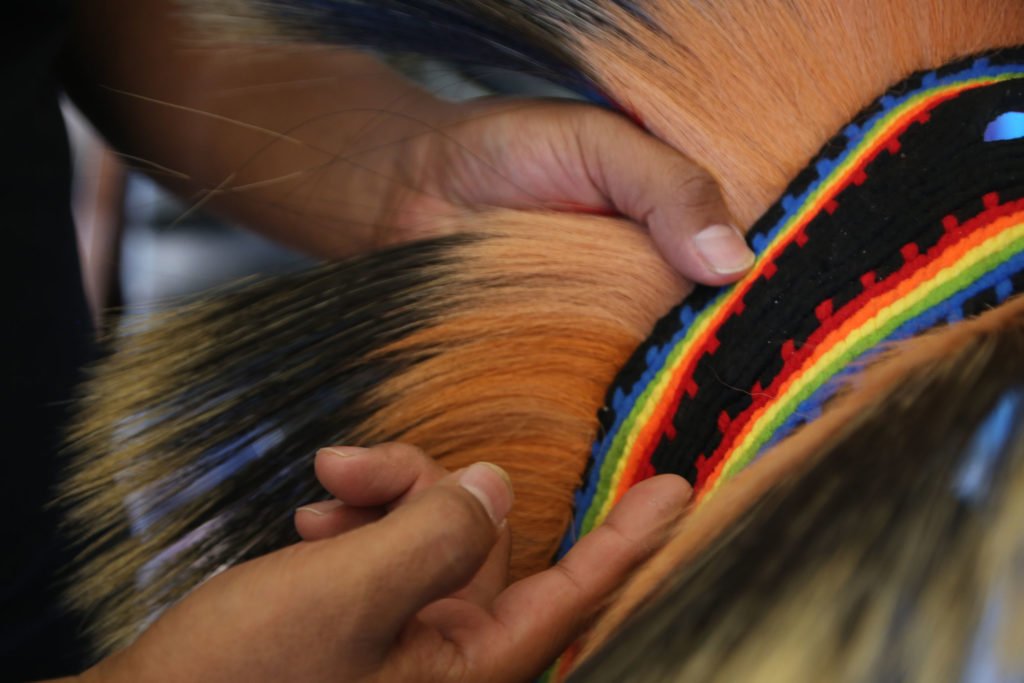 His gaze says a lot. Herb takes great pride in doing his work very well, but he is humble and a little shy. He isn’t the kind to quickly reveal that his roaches are recognized across international powwow circuits and in high demand. Instead, he remains focused on the craft and what he recognizes as important work on behalf of the Arapaho people and his family.

“My belief is that us younger people should take it upon ourselves to learn all those [skills] so we can teach the younger people and so it could go on and on through the generations… If we don’t teach these things, they’re going to die, they’re not going to go on,” Herb explains.

With every roach Herb makes, he is injecting more life into the preservation of Arapaho culture. He can see it happening.

“These actually, to me they get a life. This one already has a life,” he said of a half-complete roach. “I don’t know how to explain it, it’s weird, but that’s my belief,” he said, all the while studying the piece of art that was reflecting and amplifying his soft movements.

Herb also admits, with a chuckle, that his motivations started with more child-like desires, much longer than four years ago when he first started crafting roaches.

“When I was a little kid, I wanted a lot of stuff that I couldn’t have,” he said. He explained that the competition between dancers is stiff at powwows, and that he always saw some dancers with exquisite regalia, from the beadwork on their moccasins to the roaches atop their heads. “I didn’t have any of that.”

Pair that childhood yearning with the sense of duty he developed later, add ambition and curiosity, and you get a master craftsman, though he is tries to laugh off the label given him by others.

“I’m just always ambitious to try new things, curious, and wanting. I’ve always wanted to do something like this,” he explains.

So four years ago, his father made a loom for him. Today, it sits on the kitchen table with snacks, salt and pepper, and the many components of his craft. The loom is decorated with drawings by his daughter, monogrammed for him in her Crayola marker handwriting. The roach he holds in his hand, the one that got life a few steps ago, is for his oldest son. His children won’t envy others’ regalia at powwows, but they won’t learn boastfulness from him either.

“I take pride in being Arapaho. And I try to be ceremonial. Try to be humble. That’s what I want to teach my kids.” Herb added with a grin that his children win at powwows a lot, which thrills a father, of course. However, his first priority is to teach them to keep fun in the forefront and to remain down to earth.

Herb sees his roaches as a means of imparting lessons like this to the young members of his family and of his tribe. He teaches cultural classes at Wyoming Middle School on the Wind River Indian Reservation. As a roach maker, drummer, and member of the Eagle Spirit Singers and White Bull drum group, he has a lot of knowledge to impart.

Herb holds up a large ball of yarn.

“This is how it starts,” he says with a wry smile, before explaining the looping, braiding, and stitching that goes into making the base. He later pulls up a picture of all the porcupine hair he has sorted by length and arranged into the order they will go onto the roach. Two shoe boxes full of hair sits on the table next to the roach, some sorted already for the orders that just keep coming in.

The meticulous work of braiding and sewing rows of yarn, then rows of tying hair, then adding the upright porcupine hair is monumental. What sets Herb apart—the reason there is a grassroots branding of “Herb Roaches” among dancers—is the care he takes on each step. The lines, colors, stitches, and knots all line up evenly and beautifully. And then there is the porcupine hair. It’s tall, thick, has even edges that move with fluidity. It’s exquisite, and the time and pride put into it is evident.

“Anything you do, you should pray about it while you’re doing it or have good feelings while you do it,” Herb noted. Where it once took him over a month to complete a roach like this, he can now finish one in a week. But he’s still behind on orders.

Everyone wants a Herb Roach.

“I guess that’s what they call them, Herb Roach… A lot of the top dancers are wearing mine, and a lot of them want them. That’s how I get my head to swell up,” he says with a laugh.

Though Herb says there is no better feeling in the world than to recognize one of his roaches at a powwow in Denver or Albuquerque, he prefers to stay out of the spotlight. He leaves it to his roaches and their dancers to shine in the powwow circle and beyond.

“It’s a gift. I honestly believe that God, Creator chooses certain people to do certain things, and maybe this is what he chose me to do,” he reflects as he gives the roach in his hand one last shake and shines its life into the world.