Fat biking has become wildly popular here in Wind River Country in the last couple of years, and despite not being much of a mountain biker I was curious.

I was admittedly a little intimidated at the idea of hopping on a big mountain bike with fat tires and making my way through the snow. But armed with information, recommendations, and encouragement from Rio Rose at The Bike Mill, I decided it was high time to give it a try. For added encouragement and someone who would only gently laugh at me, I invited my mom to join me.

I came away with a new pastime and a few key lessons:

Five inches of snow fell the night before I planned to embark on this new venture. On Rio’s advice, I rescheduled. Soft snow is not only physically and technically challenging, riding on it also risks tearing up trails if you don’t know what you’re doing. So I postponed a couple days until reports from Rio, groomers, and fellow cyclists declared the packed paths and the conditions fun. You can find information like this by giving The Bike Mill a call or checking out the Lander Trail Conditions Facebook page.

When you do go out, give extra thought to the tire pressure on those giant tires. The softer the snow, the lower your PSI should be. This allows for greater displacement and a smoother, easier ride. For reference, we went out several days after a big snow when trails had only just had enough time to firm up, and Rio adjusted our rental bike tires to a PSI of 5.5.

It’s not as difficult as you expect

I decided my mom and I would test these monster bikes on packed streets in town first. It proved cliché, in that it was just like riding a bike—any bike—except the view below your handlebars looks more like it belongs to John Deere than Rocky Mountain. We busted up little piles of snow in the street with childlike delight, familiarized ourselves with gears, and loaded up for an afternoon climbing the switchbacks of Sinks Canyon. 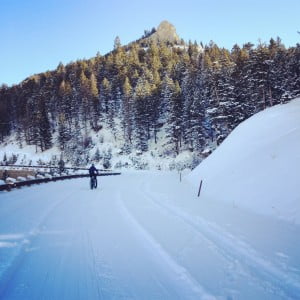 That’s where we found that there is, in fact, a bit of an adjustment period. We also found that it’s a pretty short period. When we first hit snow of several inches, packed down by snowmobiles, skiers, and other bikers, we learned that big gears and little momentum are only conducive to a gentle stop and nearly tipping over.

Within a couple hundred yards we had found our gears (easier is better to prevent sinking), and pedal stroke (as smooth as possible to feel like you’re floating on the snow). We also learned how to read the snow and avoid soft and fluffy stuff in favor of the hardest packed sections of the groomed route.

And then, for more than an hour, it was just a matter of playing, giggling, and sweating. We selected the switchbacks because they are the width of a two-lane road, and this inexperienced mountain biker found that less intimidating than a flatter ride on a single track. However, after one outing, we both felt comfortable with the idea of riding single track of non-technical riding level. Next time, we’ll explore the trails just down the canyon from the switchbacks.

Your mother will enjoy it as much as you do 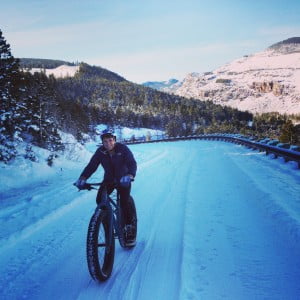 I wasn’t the only one who was new to the experience of fat biking.

I also wasn’t the only one who couldn’t stop smiling.

My mom, age 61, was impressed with the fun factor, the quality of the workout, and the new option for her beloved winter sports. Neither of us fell, but we both noted that even if we did it would hurt a lot less than any other bike fall.  We shared grins and plenty of breaks to take photos and catch our breaths—most initiated by me!

This is a special way to see Wind River Country

The switchbacks carried us above Sinks Canyon, blanketed in snow and sparkling under the sunny sky. We stopped and took each view before going back to pedaling in silence other than our breath and the crunch of snow. On the descent back to the truck, we took in new scenery and whooped and hollered our way down. 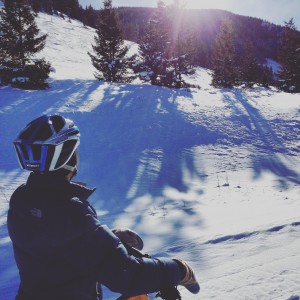 Wind River Country gets a lot of sunny, bluebird days, and when they follow snowy days like our inaugural fat bike ride did, you can’t help but stop in awe at the beauty. The warm days allow for great adventures in the snow without too many layers. On a fat bike in this setting, you can set your pace for vista viewing and for thrill all in one day. We did exactly that, and we’re looking forward to our next ride.

How to get there 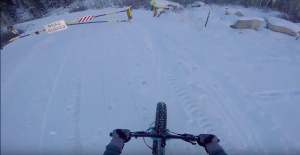 The switchbacks are closed to traffic during the winter. Park at Bruce’s Parking lot at the top of Sinks Canyon and the base of the switchbacks, about 12 miles southwest of Lander, and head up the snowy road until you’re ready to return. If you’d rather climb less and tackle some single (and wider) tracks, park at the Sinks Canyon Campground, about a mile down the canyon from Bruce’s Parking Lot. The network of trails on the north side of the canyon will keep you entertained for miles.