The Beautiful Art of Recycling: Riverton’s Banners for Buildings

By Jose Hernandez, The Ranger
This story was originally published in the March, 2017 issue of Wind River Magazine by the Riverton Ranger.

Traveling the country for locally-based energy companies, Hal Herron would take a little time out to visit some of the world’s most prestigious museums—like the Guggenheim and Met in New York, or the Gilcrease in Oklahoma—and the arts he loved so much. An enthusiast of the Impressionists, he found various museums used outdoor banner displays that featured some of the best known classic works of art. Upon inquiry, he found these banners, once they’d completed their purpose of promoting an exhibit, would be recycled in ways in which the world would never see them again.

Thinking of displaying these works in his home community, and starting with the Denver Museum of Art’s Luncheon at the Boating Party by Renoir, Hal asked if museums would donate, or if he could purchase, these outdoor banners; he received a very favorable response.

Hal soon realized he was going to need substantial support for the project he had in mind. He needed help building frames for the canvases, a crane to install them, manpower to get them hung, a truck, and buildings on which to hang the art, as well as help soliciting more pieces. So he pulled together a few friends like Jon Cox, an artist himself, Mike Martin, Phil Keller, Scott Stanley, Tracey Shepardson, John Martin, and Jon Cox Jr. among others.

Today, the City of Riverton is home to over 16 pieces of outdoor art, displayed on the sides of buildings throughout the area, most acquired and installed by Hal and Friends. In combination, they provide a powerful lesson in art history. Some of the more recent pieces were produced specifically for installation in Riverton and feature local artists and subjects.

“This project has allowed blank building walls to become an art canvas for all to enjoy,” Hal says, and the residents of Riverton certainly agree. Whether you’re a fan of Pablo Picasso’s cubism, the post-impressionistic paintings of Cezanne, or western themes, Riverton is definitely a place of interest for locals and visitors alike.

To enjoy the collection in its entirety, follow this tour through town, starting at City Hall. These cropped photos provide just a sample of the actual art installation.

The Wind River: The Ranger, 5th St. at Main. By John Cox, Sr., 2013, depicts our own Wind River, the basin and surrounding mountain range with incoming weather. The original is part of a private collection.

Saddlestring Cavvy: Kusel’s Home Furnishings, Broadway at Main. By Bruce Graham, 2007, is a study in sunlight. See how the light on the horses’ necks and back draws you in to the painting in a zigzag fashion. Buffalo Bill Center of the West, Cody.

A Contemporary Sioux Indian: Kusel’s Home Furnishings, Broadway at Main. By James Bama, 1975, the subject exudes emotion and is wearing items that bridge times through history—the choker from a distant past with ribbon shirt from the times of trappers, while he leans against a very contemporary wall. Buffalo Bill Center of the West, Cody.

Man with Crossed Arms: Proform Technologies, Park Ave between N. 2nd E and N 3rd E Sts. By Post-Impressionist Paul Cezanne, 1913, this work heavily influenced the transition from the art of the 19th-century to the new, bold, and radically different world of art in the 20th century. Pablo Picasso pronounced that Cezanne “is the father of all of us.” The original is located in the Solomon R. Guggenheim Museum in New York. 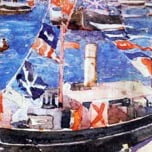 And around the corner …

Luncheon of the Boating Party: Wyo Dept Education (old high school), 121 N. 5th St W. By French impressionist Pierre-Auguste Renior in 1880. This painting was included in the Seventh Impressionist Exhibition in 1882, and it was identified as the best painting in the show by three of the critics in attendance. The original sits in the Phillips Collection in Washington, D.C.

Portrait of a Young Man: Riverton Middle School (north side), 840 Major Ave. By Dutch artist Aelbert Cuyp, circa 1660, depicts a young man in fashionable attire holding a musket in his hand. Cyup was one of the leading painters of the Dutch Golden Age in the 17th century. City of Amsterdam. 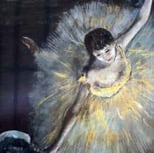 Dancer with a Bouquet of Flowers: Riverton High School (east side near bleachers), 2001 W. Sunset Dr. By Edgar Degas. French artist Degas was famous for his numerous paintings, sculptures, prints, and drawing identified with the subject of dance and vibrancy. The original can be found in the Rhode Island School of Design Museum..

Van Gogh: Self-Portrait: Riverton High School. This painting, 1889, is one of many of Dutch artist Vincent Van Gogh’s legendary self-portraits. He is considered to be among the most famous and influential figures in the history of Western art. The original hangs at the Musee d’Orsay in Paris, France.

Pitcher and Bowl of Fruit: Riverton High School. By Pablo Picasso, 1931, illustrates the popular art style of cubism. Pablo Picasso is considered one of the most influential artists of the 20th century and has inspired many artists. From the Solomon R. Guggenheim Museums in New York.

When Law Dulls the Edge of Chance: C.E.S., 2441 Peck Ave. By Charles M. Russell, 1915, from the four-piece group The Mounties Always Get Their Man. Russell was impressed with the colorful exploits and heroic deeds of the Royal Canadian Mounted Police making them likely subjects for some of his paintings. Buffalo Bill Center of the West, Cody.

A Street in Venice: Central Wyoming College, Robert A Peck Art Center (enter from N. Hill St). Created by John Singer Sargent, 1880, depicts a man speaking to a woman in an alley in Venice. It is currently located in the Clark Art Institute in Williamstown, Massachusetts.

Running on Time: AVFuel, 4700 Airport Rd (west side of white metal building). By local artist Jerry Antolik in 1990. This is an original mural, not a reproduction, and was commissioned by John Larsen of U.S. Energy. Antolik’s large murals can be seen throughout Wyoming including Hudson, Rawlins, and Cody, and in Utah and Ohio, as well as inside the Riverton Museum. Mike Dabich produced the concrete-like surface for the painting.

Meat’s Not Meat Till It’s in the Pan: Riverton Tire & Oil, 653 S. Federal. By Charles Marion Russell, 1915, depicts a cowboy out hunting in the mountains where the animal he shot lies just out of reach. The original is found in the Gilcrease Museum in Tulsa, Oklahoma.

Park in a CWC lot and roam the campus. You’ll find numerous sculptures on display. Head back down the hill from the airport and through town to Federal Blvd. Turn right (south) for additional works. The final pieces in Hudson are about 15 miles away.

The Red Checkered Table Cloth: Svilar’s Steak House, 179 South Main Street, Hudson. This portrait of a woman and her dog, 1920, is one of many of Pierre Bonnard’s works that are focused on dining room interiors. The art style first appeared in the early 1890s. Private collection. 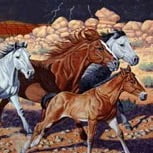 Running from the Storm: Hudson Town Hall, 333 S. Main St., Hudson. By Jerry Antolik, 1988. An original mural on concrete-like surface, donated by the Antoliks. The vivid color paint used is imported from Germany, where you’ll find vibrant painted mineral-based building surfaces ranging from castles to commercial buildings. The color stays true and paint is durable over many years.

These are not the only outdoor public art works you will find throughout Wind River Country. Additional pieces can be found in Hudson, Lander, Dubois, even in the Gas Hills. Do you know of a specific piece? Send the address and a description of the piece, and any other information you have, so the Ranger can include them on the tour: rangerads@wyoming.com.