Here’s an exercise for visiting trail runners to try: Lace up your shoes, smear on your sunscreen, and stand for a moment somewhere in downtown Lander. Close your eyes, spin while counting to 10, then stop. Open your eyes and explore the trails that lie in that direction.

Lander and Fremont County are bursting with trail-running opportunities as long, short, flat, steep, wooded, or hot as you like. And you can find options in any direction.

In the fall of 2014, Trail Runner Magazine named Lander one of its “seven top trail towns with true wilderness out the door.”

“This part of the world isn’t really a game of luck: you’ll strike singletrack rich in the Wind Rivers,” the article states.

Be sure to enter the Wind River Mountains, or any trail running venture, for that matter, prepared. Bring a rain or wind jacket, as weather changes quickly and sometimes is difficult to see from these routes. Carry water—Wyoming is a mountain desert climate. It’s also important to be bear aware—know which trails necessitate running with bear spray.

Close enough you’d be tempted to run to the trailhead

Locals call a web of trails about four miles up Baldwin Creek Road “The Bus Loop.”   “Look for the dirt pullouts for parking immediately after the first cattle guard on Baldwin Creek Road, and the trails begin on the south side of the road,” Lander Running Club founder Evan Reimondo recommends.  He says from there you can get three to 10 miles in (if you get creative in linking together loops).

“My favorite part is running the bands of north-facing slickrock with views of Red Butte and the foothills above Lander,” Reimondo notes.

Reimondo also recommends Brewer’s Trail for longer runs, off of Hwy. 131 in Sinks Canyon State Park. Park in the Sinks Canyon Campground (look for the campground sign on the left going up,) bounce on the swinging bridge over the Middle Fork of the Popo Agie, and follow the trail up Fossil Hill, “through forest and open meadow with views of Sinks Canyon and the greater Lander Front.”

This trail is excellent for runs anywhere between five and 15 miles.

Across Sinks Canyon Road and up the canyon just a bit, you can start a route on the other canyon wall. Climb Fairfield Hill and run along the stark south-facing limestone walls that are so popular among rock climbers for a challenging start and an exposed route.

You’re going to need snacks in the car

There are many options that will give you the chance to get pumped up with music on the way, but don’t forget to have a post-run snack or two waiting in the car.

Bruce’s Parking Lot is the starting point of one of the most popular trails in all of Wind River Country. Follow the Sinks Canyon Road (Hwy. 131) from Lander to the base of the switchbacks, about 10 miles from town. Park at the large parking lot on the left for access to a wide variety of running options out of a single trailhead. The Middle Fork Trail runs along the river for the first two miles to the Popo Agie waterfall, which boasts a refreshing slide into the pool below. From there, you can head back down or continue into the Wind River Mountains to explore the more than 30 miles of spectacular views, alpine terrain, and river splashing. Trail Runner Magazine notes that just in the 100-mile long Wind River Range, runners can find over 600 miles of trail to pound, much of it in designated Wilderness in the Shoshone National Forest.

“I head to the Catalyst Trail for a spectacular shorter run,” Rainbolt advises. “Take the single track trail that traverses Fossil Hill. The very well-maintained trail winds through pine groves and alpine meadows (wildflowers here are fantastic in early summer), and is perfect for a quick evening out and back at whatever distance you choose.”

Worth the drive—stretch before getting back in the car!

In any conversation about Lander trails, the names “Johnny” and “JBR” will float around, and though they may sound like some sort of code to confuse visitors, they refer to a welcoming and popular endurance hub: Johnny Behind the Rocks.

Load up with water, snacks, and music, and head south out of Lander on State Highway 287 for about eight miles. Turn left at the junction to Rawlins, continuing east on Hwy 287. Shortly after crossing Twin Creek and a red cliff band on the left, prepare to turn left and go through a green metal gate. The parking area, which lies about 15 miles from Lander, is marked and well maintained by the Lander BLM Field Office and the Lander Cycling Club. 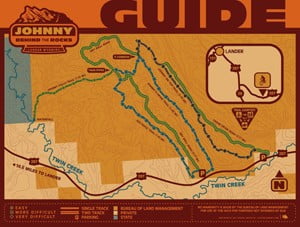 Johnny Behind the Rocks—or Johnny or JBR—is a trail system that explores the desert of Wyoming and provides incredible views of the Wind River Mountains. A number of loops span the region, providing as many run options as your creativity and lung capacity will allow.

In its feature story about Lander’s appeal for trail runners, Trail Runner Magazine recommends exploring the Shoshone National Forest’s backcountry from Dickenson Park Trailhead. Here’s what they had to say about the extreme adventure:

Bear Ears Trail and Lizard Head Trail out-and-back from the Dickenson Park Trailhead on the Wind River Reservation. In a word, epic. Head up the Bear Ears Trail (Shoshone and Arapaho Tribal Permit required) from a starting altitude of 9,400 feet. At about seven miles in, you’re above treeline and among sweeping views of the Wind Rivers. Enjoy the Bear Ears rock formation. “The rocky trail switchbacks up quickly to 12,000 feet, and some of it is hardly runnable,” says [Gabe] Joyes. “The views and alpine terrain are immense.” Turn left on Lizard Head Trail at about nine miles in. Then, for several miles, meander an open rocky plateau beneath towering mountains. About five miles along the Lizard Head Trail, the Cirque of the Towers—17granite peaks surrounding a gargantuan basin—will come into view. Soak it in, eat lunch and turn around before the trail dips into Lizard Head Meadows and treeline. This yields a 28-to-30-mile run.

Finally, Evan was willing to let us in on a secret, and we’re only rewarding those of you who have the endurance to read this far:   “Don’t tell anybody, but the Red Canyon Rim is one of the most fantastic landscapes around. But it is also critical wildlife habitat and highly sensitive to disturbance. If you go, stay on the two-track or durable surfaces (slickrock), follow Leave No Trace principles, and remember to slow down and take it all in,” he pointed out. “This place is more about the experience than the speed,” Evan added.

To enjoy this very special run, head south out of Lander on Hwy 28 for 24 miles and stop at the Red Canyon Pullout (the first paved one on the right, not the big official Lookout with visitor signage farther uphill). Go through a gate (close it!) and head down the two track dirt road to take in the breathtaking views the Red Canyon has to offer on foot.