If you missed the re-run this month, you can also witness a Pony Express reenactment during Gold Rush Days at South Pass City Historic Site July 9–10. 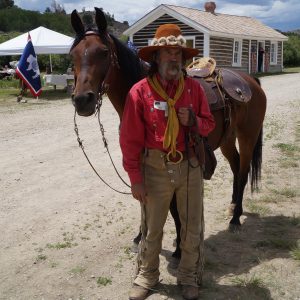 The Pony Express only lasted 19 months, but it was the stuff of legends, so much so that for 37 years the National Pony Express Association has been holding annual re-rides across the U.S.

Once upon a time, Pony Express riders galloped on horseback across the plains from St. Joseph, Missouri to San Francisco, California, handing off of the mochila—mail bag—from one rider to the next.

This month, more than 600 riders will cover the 1,966-mile route along the Pony Express National Historic Trail from California to Missouri, passing through Wyoming’s Wind River Country today, Monday, June 20.

Two of those riders are Heidi Powell and her daughter, Vanessa, 19, of Riverton.

“It’s just really cool to be able to ride from Atlantic City to Jeffrey City,” Heidi, captain of the Rocky Ridge Division said, describing a quiet mountain pass in Fremont County on BLM Road 2302. “It’s too surreal to be able to explain, but to be able to ride your horse at night, and you’re just moving—you don’t have much to think about because there isn’t a lot of traffic—it’s just beautiful.”

Approximately 10 horses and six riders will cover the 77-mile stretch between Atlantic City and Jeffrey City tonight, and one of the key differences is that riders each only run a few miles—rather than the full stretch between stations—before handing off the mochila.

Atlantic City is scheduled to get the mail between 7:30 and 8 p.m. Monday, June 20, though the National Pony Express Association points out the mail can run up to two hours ahead or behind schedule. Interested viewers can watch the riders from town, as well as tracking them online thanks to the GPS unit riders will carry in addition to 900-1,000 U.S. Mail letters.

“Atlantic City is just a cool place to be anyway,” Heidi said. “It will still be daylight, so you will be able to see the riders, the trailers, the transition of the mochila.”