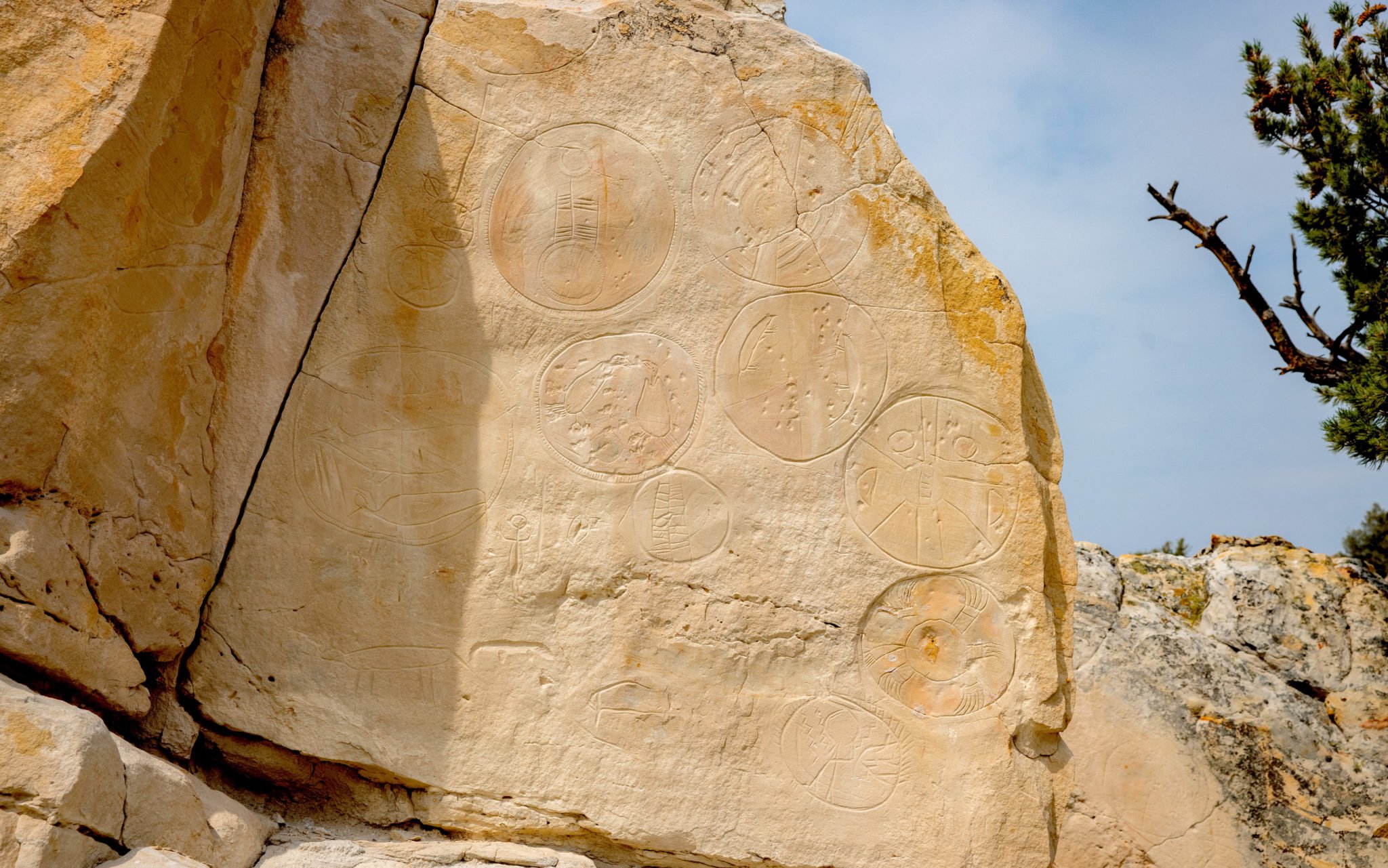 A rare glimpse of ancient Indian history awaits visitors, in authentic Indian petroglyphs, preserved at a unique site called Castle Gardens. Petroglyphs, carvings in stone, were used by past cultures as ways to record history and share stories. Castle Gardens is 46 miles east from the southern edge of Riverton. Half of the drive is on dirt roads, making the trip longer than the mileage indicates. Plan at least 1.5 hours to get there.

After driving 35 miles on Hwy. 136, turn left onto a bladed dirt road to Castle Gardens. In 6 miles, a Bureau of Land Management (BLM) sign indicates a right turn onto another dirt road, noting that Castle Gardens is 5 miles away. That 5-mile stretch of secondary road receives little maintenance. During dry summer months, travelers should have no trouble driving it. In the winter and spring, the final 3 miles of this road may be snowed in or too muddy to drive. When you crest the top of the hill and look down at the one-of-a-kind Castle Gardens, the drive will have proven worthwhile.The Castle Gardens petroglyph site has been designated on the National Register of Historic Places. An unpaved hiking trail leads visitors to the petroglyphs. Set aside at least 1 hour to walk around the site.

For a short side trip, after leaving Castle Gardens and returning to the paved road, you can visit the Gas Hills uranium mines by turning left and driving another 10 miles east. More detailed information on Riverton’s mining industry is available at the Riverton Museum at 700 E. Park Ave. Call 307-856-2665 for seasonal hours.

The confluence of the Big and Little Wind Rivers is the preserved site of the 1838 Mountain Man Rendezvous, where trappers came to trade their furs and partake in several days of merriment.  Riverton has the only site of an original trapper’s rendezvous not developed by modern man. The 1838 Rendezvous site, which stretches 100 acres along the Wind River, looks much like it did in 1838, the final year a “big” rendezvous was held. The site is easily reached from the intersection of Main Street and Federal Boulevard. Travel 5 blocks south on Federal and turn left on East Monroe Avenue for 1 mile. At the intersection with Smith Road, turn right. Follow the signs to a dirt road into a gravel storage area and in 2/10ths of a mile, you’ll come to the buck and rail fence and a wooded area that is the 1838 site.

At the site, a walking path with stone markings and signs relate tales about famed mountain men. The developed trail can be walked in 30 to 40 minutes. The site is open to the public year-round. The 1838 Rendezvous Association is dedicated to the preservation of the site and the re-enactment of the rendezvous. For a week every July, members don period clothing and relive the days of yore.

Check with the Riverton Chamber of Commerce for dates to this year’s 1838 Rendezvous to barter on trader’s row, try your hand at hawk and knife throwing and watch black powder rifle shooting contests.

The center is located at 1075 S. Federal Blvd in Riverton. The center features selected displays from the Jake Korrel Collection of more than 40 wildlife mounts plus historic traps dating from 1804. The center is open 10-4 Monday through Saturday. Free admission. Call 307-856-0706 for additional information.

Perhaps the most well-known mountain man to attend the 1838 Rendezvous was Jim Bridger, who began traveling to the Rocky Mountain region in 1822, when he was 18. He spent 20 years in the West as an explorer, trapper and scout and he is credited with being the first white man to discover the Great Salt Lake in 1824. In an 1828 trapping expedition along the Wind River, a cache of 150 furs, stored at the junction of the Big Wind River and what was then called the Popo Agie River, was stolen from Jim Bridger and his party. Bridger established Fort Bridger, pioneered the Bridger Trail, and shares his namesake with Bridger Pass, which crosses the Continental Divide.