One after the other, we removed our footwear and prepared to pad through the metal detector in our socks. Curiously, the TSA agent eyed the four pairs of cowboy boots on the conveyer belt. They were in bins after a business traveler’s expensive laptop and before four carry-on suitcases containing cowboy hats that solicited similar looks from the other travelers waiting in line.

“I want to go wherever you’re going. Please take me with you,” joked another TSA agent. “Wherever” we were going was Wind River Country, Wyoming.

“Would our family of four East Coasters be welcomed in the Cowboy State?” I silently wondered as the plane took off, away from the rising sun.

We arrived at the dude ranch, checked into our rustic cabin and practically skipped to the corral—anxious to get our boots dirty and meet the horses we would be spending so much time with in the coming days.

Our 4-foot-11 son, Jack, craned his neck to look up at the 15-hand-tall quarter horse he’d been paired up with. The head wrangler talked about Buck like an old friend, “He’s timid and sensitive at first, but he also likes to be a leader.” “Huh,” I thought. “Sounds a lot like Jack.” Jack’s sister, 10-year-old Claire, was just as well suited for her stubborn, yet loveable palomino, Chance.

“Do you have a degree in matchmaking?” I half-jokingly asked the wrangler as my husband, Jeff, and I slid into our saddles. We nudged our horses’ sides to giddy-up and were off to trot. “Yeehaw!” Claire cried with a prominent country western twang as Chance cantered after our guide.

Riding horses was nothing new for our family since we boarded a horse at a stable close to home and often rode on the weekends. But riding horses in Wind River Country rocked our world. For starters, there was the scenery.

Soaring some 13,000 feet above sea level, the snow-capped Absaroka Mountains with their jagged peaks looked nothing like the rolling Appalachians back home. “Yodel-lay-hee-hoo,” Jeff said. “The Absarokas are like the Alps, but with a Western flair.”

Miles of pastoral prairie met the mountains, and an endless horizon was never interrupted by skyscrapers or freeways. One other thing distinguished our hometown from where we were.

New word(s) of the day

“Gym-kuh-huh?” asked Jack rather skeptically on our second ride of the trip. The head wrangler got that question a lot and quickly went into an animated explanation of gymkhana, an equestrian sport dating back to the ancient Mongols. More recently, cowboys have adopted this art of competing on horseback. Barrels, poles, cones and other obstacles are strategically arranged on a course and riders race to see who can complete it in the fastest time.

The ranch’s amateur course was designed to improve horsemanship skills like balance and gait progression, and we all enjoyed taking turns and timing each other. Riding was fun, but this added a whole other element. We thought we did pretty well and were proud of ourselves—until we went to the local rodeo later that night and witnessed seasoned riders in action. 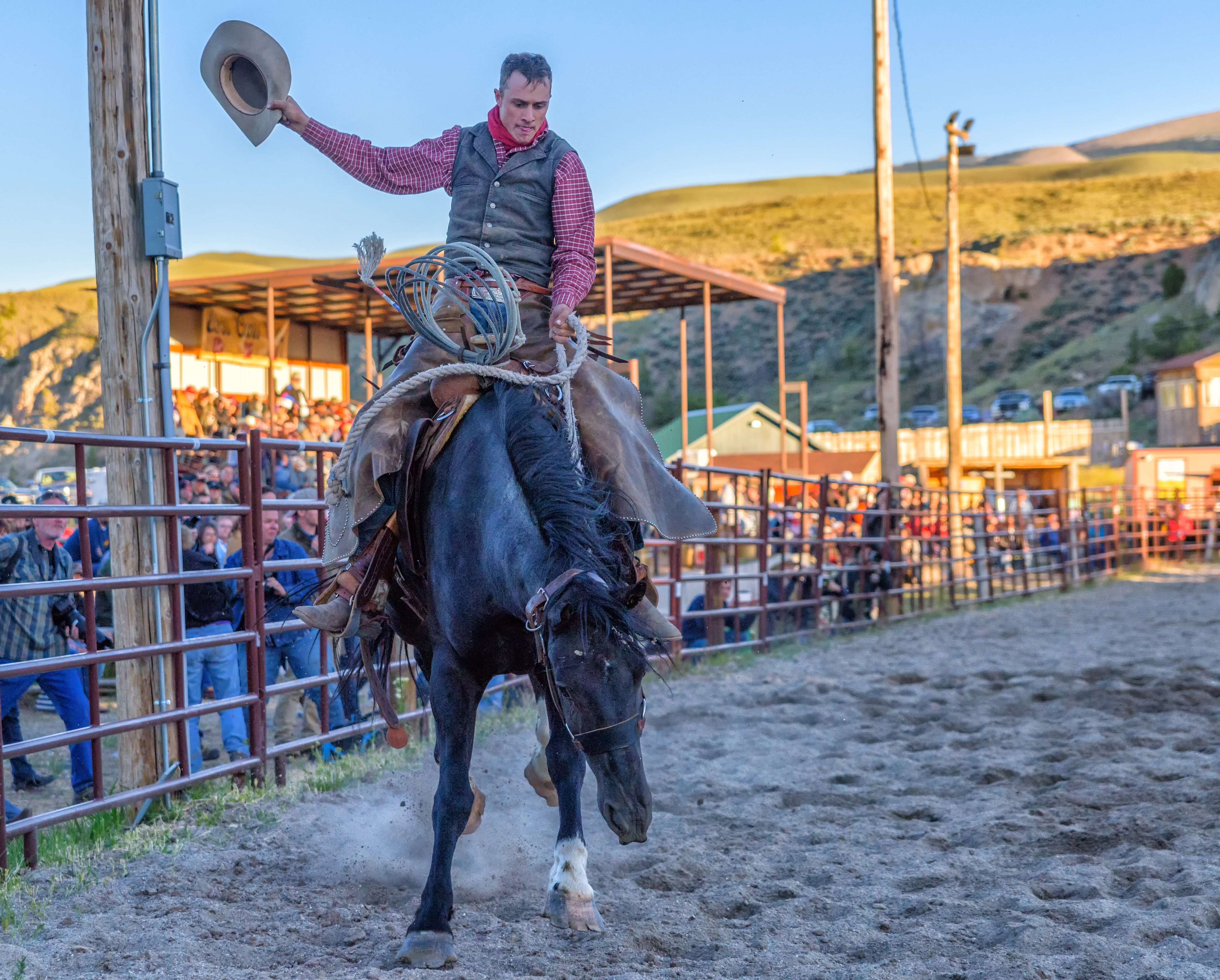 Pronounced “dew-boys,” the authentic old Western town of Dubois was a short drive from the ranch. The town’s arena is home to Friday night rodeos during the summer and, shoulder-to-shoulder with the friendly locals, we cheered for the courageous cowboys competing in events like calf roping, barrel racing and even bronc riding.

“Don’t forget to bring your best do-si-do to town on Tuesday night,” said the rodeo clown, who took a liking to us newcomers and called us out in the crowd. Before Claire could ask what do-si-do was and I could ask what the town did on Tuesday nights, the clown’s hands were holding the cowgirl’s next to him and they were giving us a preview of their square dancing skills.

“We’ll be there,” Jeff said. I was pleasantly surprised. Who knew my husband, with his two left feet, was interested in learning a new style of dance? “When in Wyoming,” he said with a wink.

We also knew that we needed to take advantage of Wind River Country’s incredible outdoors activities during our getaway, and we started with spotting wildlife. Eyes glued to the binoculars and lenses focused on the granite cliffs, we watched the Bighorn sheep rams grazing. It was magical. We had driven back into Dubois to experience one of the region’s most popular tourist destinations, the National Bighorn Sheep Center. Being around horses all weekend at the ranch was a treat, but wild animals have an allure their domestic counterparts lack.

After watching an eye-opening educational video about these fascinating animals most people know very little about, we toured the center’s exhibits. The kids had fun posing for pictures next to the life-sized mounts of the Rocky Mountain Bighorn Sheep. Photos uploaded and tagged on social media, we accepted a map from a volunteer and left cell service for a drive to Whiskey Mountain. At Whiskey Mountain, we were honored to encounter the record-breaking resident herd. Graciously, and as if they knew we were in awe, the rams and ewes let us observe them in their stunning surroundings.

That afternoon, we traded our binoculars and scopes for fishing poles. Wind River’s fishing scene is world-renowned among anglers, and while it was easy to catch fish, it was tough to decide where to go. “Too bad we can’t be in two places at once,” Jeff told our fishing guide who was describing our options. From glacier-carved alpine lakes to clear streams meandering through the Wind River Mountain Range foothills, there was no shortage of picturesque—and productive—places to drop our lines. We ended up flipping a coin.

We didn’t walk away with the trophy-sized golden trout the area is famous for, but we did manage to snag some sizable, and colorful rainbow trout. Just wading in the water, soaking up the scenery and listening to the birds singing and the kids laughing was far more relaxing than any spa day I could imagine.

Our freshly scuffed boots didn’t garner much attention as we went through the short line at airport security on our way home. This was cowboy country! Boots and hats were the norm, and the only things warranting double takes were the scenery and the wildlife.

As our plane took off, away from the setting sun, I looked down the row at my family. They looked tired, but in a good way. Wyoming had more than welcomed us. Wind River Country had gifted us with a week’s worth of memories that would last a lifetime, if not longer.