At first glance, Dubois, Wyoming, is clearly brimming with Western heritage. The main street is characterized wooden sidewalks and live ragtime music ringing from a piano. Dubois is surrounded by guest ranches, and weekly rodeo and square-dancing events define summer nights in town.

But raise your eyes a bit, and you will see some of the buildings have wooden facades that were constructed from scrap lumber that was felled neraby. In those mountains and in the facades are remnants of a separate culture that once defined Dubois and is still celebrated there.

The mountains still hold cabins, flumes, dams, and the stories of the tie hack era. Starting in the late 1800s, railroads tied East to West in America, and the literal ties for those tracks often originated in Wyoming’s Wind River Country. Workers called tie hacks harvested trees from places like the mountains surrounding Dubois. The tie hacks, many of whom were Scandinavian, lived in remote camps high in the mountains close to the tall pines that were their livelihood.

“Some 2800 ties were needed for each mile of track, so a large and inexpensive supply was critical. Lodgepole pine grew in abundance in all the major mountain ranges of Wyoming — straight and tall with gradual taper and a trunk relatively clear of knots,” WyoHistory.org explains.

And tie hacks, many of whom developed their skills in their Scandinavian homeland, were as adept at moving lumber as Wyoming’s cowboys were at moving cattle.

“Each tie hack was allotted his own strip of timber, about 150-200 feet wide and up to one-half mile long. First, he felled a suitable tree with a one-man crosscut saw, then limbed it with a double-bitted ax, which was also used to score the surfaces to be hewn—making two flat sides on opposite sides of the tie,” explains WyoHistory.org. “A seven-pound broadax with a ten-to-twelve-inch blade was used to hew the wood to the final dimensions. A finished surface hewn by a skilled hack appeared to have been planed. The bark was then removed with a ‘spud’ or ‘spud peeler,’ a long wooden-handled tool with a curved blade on one end.”

From there, a horse and wagon hauled this to be stacked or, more impressively, the crew hauled them to flumes like the remarkable artifact in Warm Spring Canyon, parts of which remain to this day.

Read more about the construction of this five-mile wooden channel, which carried ties from high in the mountains down to the Wind River north of Dubois, and, later, to the tie plant in Riverton.

“In early days, ties were delivered to the railroad by floating them down the Wind River on the annual ‘long walk to Riverton.’ This walk took place just after the Wind River peaked in spring runoff so the ties would move swiftly downstream, but it was dangerous and difficult.” the U.S. Forest Service website explains.

During the long walk to Riverton, the tie hacks camped on the riverside, cooking dinner each night in Dutch ovens. Passers-by on the nearby highway often stopped and were invited to join. This was an extension of the tie-hacks’ tendency to invite people passing by their mountain camps to dinner, even in the depths of winter.

The tradition of Scandinavian cooking and community meals—even with perfect strangers—is the root of Dubois’ annual Swedish Smorgasbord.

During this period in Dubois history, Lydia Olson lived at the Warm Springs Tie Camp outside of Dubois with her Norwegian husband, Martin. It was with these sometimes rowdy, always welcoming history makers that Lydia learned to prepare Swedish and Norwegian dishes for Martin, his friends, and his employees.

Lydia was also a member of St. Thomas’ Episcopal Church in town. When the church needed an addition—and the funds to build it—she cooked up a recipe for success that continues to define this little “cowboy” town: A Smorgasbord fundraiser. An all-you-can eat buffet of traditional Scandinavian dishes such as cabbage rolls, Swedish meatballs, hardtack, homemade mustard, coleslaw, fattigman, spritz cookies, and more.

The first time Dubois experienced the blessing that is the Swedish Smorgasbord was 1948. This year will mark the 70th anniversary, and the tradition and generosity remain as strong as the tie hacks and their wives who created it. 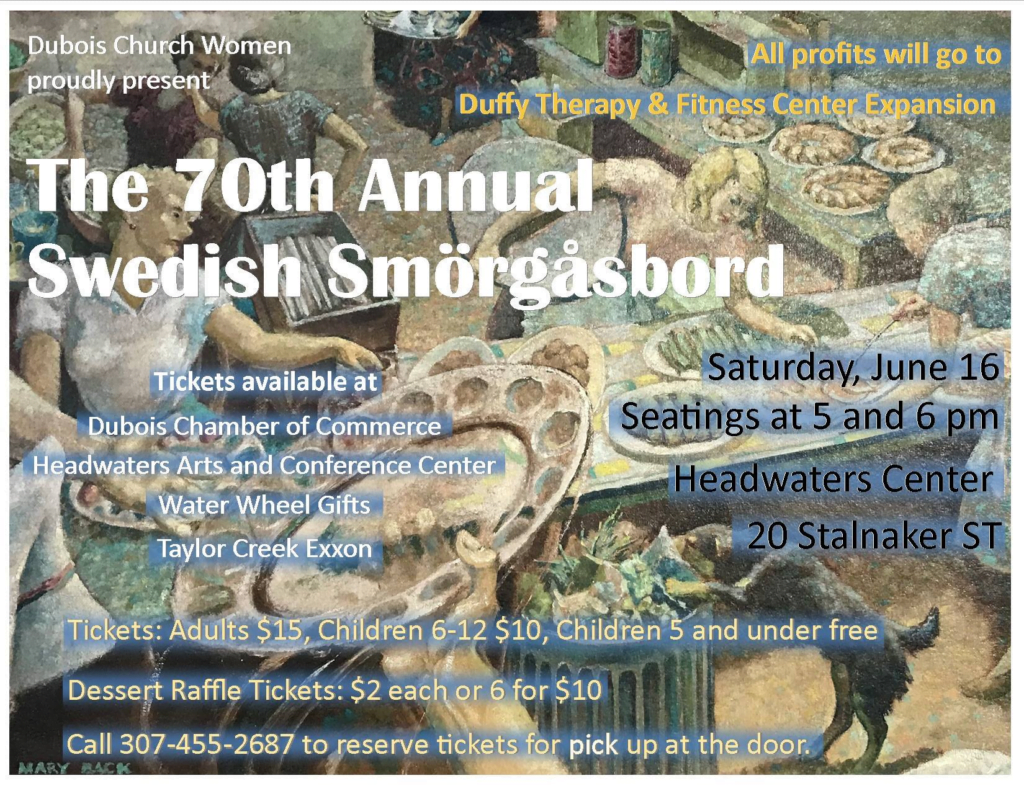 “The pattern and tone—bright, friendly, hearty, picturesque—were set by Lydia Olson,” reported The Wyoming Churchman in a 1957 article. “The response staggered them. They ran out of food long before they ran out of people.”

Five hundred. Seven hundred. These are the numbers the town of 400 started to see at the annual fundraiser. As it is today, Dubois was a welcoming, community-centered, event-driven town. So adjustments were made to ensure no one had to wait for a meal, including serving waves of the buffet throughout the evening.

But the evening was never just about the food: Each table is carefully decorated with Scandinavian flags, and photos from the tie hack era inform those in attendance about the town’s less-obvious foundations. Presentations punctuate each sumptuous bite, and historical materials are on display for browsing. Volunteers from the community dress in traditional Scandinavian attire to serve guests. The evening is topped by handmade desserts being raffled off for the cause.

Though the organizing party has changed a few times over the decades and the event took a short hiatus, the Dubois Smorgasbord has been a keystone event in town for 70 years now. The proceeds now go to a local nonprofit organization agreed upon by all the churches in town.

You don’t have to look very close to see that the face of Dubois still reflects the industry that brought the Scandinavian tradition to Wyoming’s Wind River Country.

This year’s anniversary event will commemorate 70 years with some special additions to the evening. Stay tuned at duboiswyoming.org and windriver.org for details.